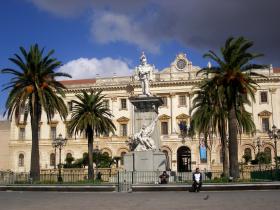 UNISS main campus is based in Sassari (population 130,000), the main city in the North of Sardinia. It lies on a range of hills overlooking the strait between Northern Sardinia and the Southern coast of Corsica. The island enjoys a mild and temperate climate during the whole year, being located in the middle of the Western Mediterranean sea and at a 225m altitude.

Temperatures rarely fall to 0°C (32° F)  in winter and may reach 35-40°C (95-104°F) in summer. Trade, services and tourism are the core economic activities of the city and its province. Wine, olive oil, products and meat are still produced even near the suburbs of the city.

Educational, cultural, economic and health services are provided within the city center. 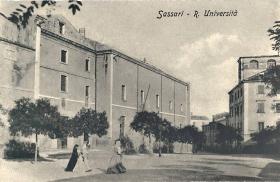 Traces of Sassari's prehistory lie a few metres below your feet, a couple of kilometres out of town and in the local museum. Sassari has expanded both outwards (from the centre) and upwards (as new buildings have been erected on the sites of previous ones).

Sassari (originally called Tathari or Tattari) began to flourish as an urban centre in the eleventh century when refugees from the coastal area near Porto Torres (once an important Roman port) moved to the inland to avoid pirate attacks.

Like in many other places in this part of the world, Sassari history is part and parcel of the rise and fall of Mediterranean empires. Aragon, Spain, Genova, Pisa and Italy (to mention but a few) have passed through and left their mark. The population was, of course, not always willing to accept foreign domination, and rose in revolt in 1236, 1325 and 1798 to defend their natural, traditional, civil rights.

This involvement in political events may explain why Sassari is the birthplace of a number of political figures of national importance. Antonio Segni (1891-1972) was the President of the Italian Republic from 1962 to 1964, Francesco Cossiga was President from 1985 to 1992, and Enrico Berlinguer was General Secretary of the Italian Communist Party.