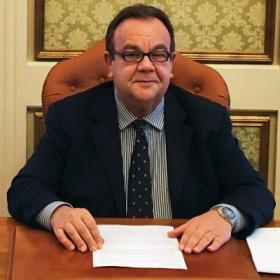 Gavino Mariotti has been a Full Professor of Economic-Political Geography at the University of Sassari since 2010. His interests in research initially focussed on the study of environmental issues related to mining activities. This field of study was subsequently broadened to incorporate economic aspects and local development. He has carried out specific research on the territory related to tourism with the perspective of rediscovering and giving value to the hinterland of Sardinia as well as mapping aspects connected to tourism.

More recently, his research activity has been centred on analysing territorial competitiveness. Since 2015, he has been in charge of the “Environment and Territory – Data Analysis” laboratory of the Department of Humanistic and Social Sciences (University of Sassari) which carries out scientific research and advanced training in areas related to geography, the environment, territory and society, mapping and historical-geographical areas. Since 2020, he has been a member of the scientific committee of the series Route – Geografia dei trasporti e del turismo (TAB Edition).

Gavino Mariotti has been a member of the Board of Directors and the Academic Senate of the Università di Sassari many times. From 1962 to 2002 he was elected by the Regional Council of Sardinia as Advisor to the administrative body of E.R.S.U. (Ente Regionale per il diritto allo Studio Universitario di Sassari).

From 2012 to 2016 he was Head of the Department of Humanistic and Social Sciences.

Full details on the recent election can be found on the dedicated page.

Since 2006 he has been Full Professor of General and Applied Hygiene (MED/42) at the Department of Medical, Surgical and Experimental Sciences at the University of Sassari.

During 2009-2013 he was President of the Master programme in Pharmacy and, since 2014, he has been Coordinator of the Doctorate programme of Biomedical Sciences. In 2018 he was nominated as President of the Commission of Visiting Professors of the University of Sassari. Since 2018 he has been Regional Coordinator of the Italian Multidisciplinary Society for the Prevention of Infections and Health Organisations (S.I.M.P.I.O.S.).

His research activity is documented by numerous scientific publications in national and international journals in the areas of hospital hygiene and the epidemiology and prevention of infectious and non-infectious diseases. More specifically, his interest has focussed on the research of resistance genes in microorganisms to antibiotics and on the epidemiology of infections from Human Papilloma Virus, Meningococco and Pneumococco, Listeria monocytogenes, Salmonella, Helicobacter pylori through the application of traditional diagnostic techniques and molecular biology.

Full Professor of Rural Economics and Estimation and Agronomist, he teaches Economics of the agro-zootechnical sector and Economics and agro-industrial marketing.

He chaired the Evaluation Unit of the University of Sassari, was a member of the steering committee of the National Evaluation Committee of Italian Universities and is an expert disciplinary evaluator accredited by ANVUR.

Academic of the Georgofili, he chaired the Italian Society of Agro-Food Economics (SIEA) and is director in charge of REA - Italian Agricultural Review Economia, scientific journal of Italian agricultural economists.

He was Vice Director of the Department of Law from 2015 to 2017 and Director of the School for Specialisation of Legal Professions from 2014 to 2017.
He is Vice Coordinator and a member of the Panel of Research Doctorates in Legal Sciences.

He is a member of the Scientific Committee of the Forensic Training School of Nuoro.

She has carried out support activity at the Azienda Ospedaliero Universitaria (AOU) of Sassari as Director of the Nuclear Medicine complex and PET Centre since 2013.

She is currently President of the undergraduate programme in Medical Radiology Techniques, through Images and Radiotherapy and board faculty member of the Research Doctorate in Biomedical Sciences.
She is a member of the Regional Observatory for the training of Medical-Specialist in the Area of Clinical Services.

Her research activity is centred mainly on the use of highly sophisticated medical nuclear methods (molecular Imaging, SPECT, SPECT/TC, PET/TC) in oncological pathology (K mammary, pulmonary, thyroidal and prostatic and neuroendocrine tumours), neurological pathology (neurodegenerative illnesses) and endocrinological pathology (hyperparathyroidism), and on radiomics, which represent the main focus of her scientific publications.

Associate Professor of Urban Planning Techniques at the University of Sassari, where she teaches Environmental Planning in the undergraduate course of City Planning, Territorial Planning, Environmental and Landscape Planning. She was Director of the Department of Architecture, Design e Urban Planning from 2018 to 2020. Dean appointed delegate of Didactics from November 2014 to December 2017. President f the undergraduate programme in City Planning, Territorial Planning, Environmental and Landscape Planning and the international Master programme in Urban and Political Planning for the City, the Environment and Landscape from June 2012 to October 2014, Coordinator of the  International Doctorate in Architecture and the Environment from 2013 (XIX cycle) to 2015. Vice Director of the Doctorate School in Architecture and Planning from 2006 to 2012. In February 2014 she became ‘prima fascia’ professor nel settore concorsuale 08/F1 - Band 2012.

She is currently associate editor of the scientific journal Open Access City, Territory and Architecture (CTA) - An interdisciplinary debate on project perspectives – class A journal, member of the editorial committee of the del Territorial Methods series of FrancoAngeli editors and the Urban and Landscape perspectives series of Springer editors.

Since 2003 he has been Full Professor of Specialised Zootechnics (SSD AGR 19) at the University di Sassari.

Pier Andrea Serra is Associate Professor of Pharmacology at the Department of Medical, Surgical and Experimental Sciences and Associate Researcher at the Institute of Food Production Sciences of CNR. He is Chair of the course in Pharmacology in biomedical areas and President of the undergraduate programme in Sciences of Nutrition, Health and Wellness where he teaches Pharmacology and Nutraceutics.

Pier Andrea Serra’s research activity is shared between the study of neurochemical mechanisms of neurodegeneration (Parkinson in particular) and the development of new technologies based on biosensors, to monitor the chemistry of the central nervous system and useful nutraceutics for the prevention of neurodegenerative illnesses.

His work in the Third Mission focusses on monitoring, developing and giving value to the activities of Public and Social Engagement seen as a series of organic and institutional actions promoted by the University of Sassari, as a cultural agency, for civilian society. Particular attention is given to the evaluation of the impact and the benefits of these activities on society as a whole.

His conviction is that the dimensions of Public Engagement, and the interaction with society in general, constitute substantial elements in the formative and professional training of students, researchers and technical-administrative personnel. To this end, he promotes the these policies both locally and nationally, as member (March 2018) of the Coordinating Committee of the Italian Network of Universities and Research centres for Public Engagement (APENet).

The Academic Senate is the main advisory body of the University, that is responsible for the coordination, planning and regulation of academic activities. It offers advice and opinions to the Board of Trustees in the fields of education, research and services available to students. It also proposes the launch or termination of curricular courses and academic hubs.

For the updated list of members, visit the official page.

The Board of Trustees

For the updated list of members, visit the official page.

Elisabetta Neroni is called to head the university on May 31st 2022 by the Academic Senate and the Board of Directors for the next three years.

She is graduated in law at University of Cagliari.

Until March of this year she was a member of the Evaluation Unit of the University of Cagliari.

Finally, she held the position of president of the Evaluation Unit of the Municipality of Cagliari, where she was general manager from 2017 to 2019.

For a full organizational chart of the University of Sassari, visit the official webpage (Italian).